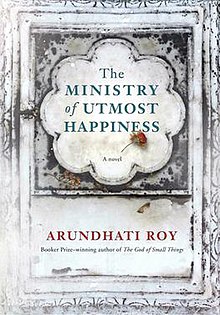 The Ministry Of Utmost Happiness By Arundhati Roy

Arundhati is a great storyteller. Period. Having said that, ‘The Ministry of Utmost Happiness’ is the second novel by the author published twenty years after her debut ‘The God of Small Things’. The book is a vivid depiction of Arundhati’s vast travel experience from the messy crowded streets of the capital to the gorgeous valleys of Kashmir, her research and observations. As a reader, I honestly felt too much happening in the book from all the directions, all the time making it hard to process all the characters and plots in a single flow. But gradually, actually much later in the book, thankfully everything falls in place. You have to be a patient reader to appreciate Arundhati’s work in this book, as every flip of the page will arouse some curiosity which will be pacified only towards the end.

The book is jammed with complex characters and plots throughout. There’s no single protagonist or antagonist – all the characters are widely different from each other yet strikingly similar in a way that all of them are ‘broken by the world they live in and then rescued, patched together by acts of love – and by hope.’ The readers first witness the transformation of Aftab to Anjum, her struggles, misfortunes, self-acceptance, popularity, her people, motherly love, possessiveness, and decisiveness. Then there is Tilotima, whose queerness causes a deep attraction and love for men around her, and my Musa who is Tilo’s past and present lover, eventually a militant or a victim of his circumstances, you can decide, There are two Miss Jebeens who partially act as glue to the story of all these characters – one buried in the Martyr’s Graveyard in Srinagar and second found abandoned in the overcrowded streets of Delhi during a protest. Saddam Hussain, Naga, Dr, Azad Bhatiya, Amrik Singh are few other characters that won’t escape your attention. I leave it to the readers to discover their bits.

Arundhati doesn’t just bring you in a shabby mohallah, she makes you live there, she makes you experience the militancy and atrocities faced in Kashmir through her writing.

“From the safety of their balcony, Miss Jebeen and her mother watched the funeral procession approaching. Like the other women and children who were crowded into the wooden balconies of the old houses all the way down the street, Miss Jebeen and Arifa too had readied a bowl of fresh rose petals to shower on the body of Usman Abdullah as it passed below them. Miss Jebeen was bundled up against the cold in two sweaters and woollen mittens. On her head she wore a little white hijab made of wool. Thousands of people chanting Azadi! Azadi! funneled into narrow lane. Miss Jebeen and her mother chanted too. Although Miss Jebeen, always naughty, sometimes shouted Mataji (mother) instead of Azadi!”

The book is social, philosophical, political and that’s why perhaps could be controversial for some readers. You come across Urdu shayris, randomly scribbled letters, and even theoretical quotes in the book.

“Nietzsche believed that if Pity were to become the core of ethics, misery would become contagious and happiness an object of suspicion.”

Arundhati compels you to take sides and then switch sides. This book is a literary marvel that shouldn’t be missed.