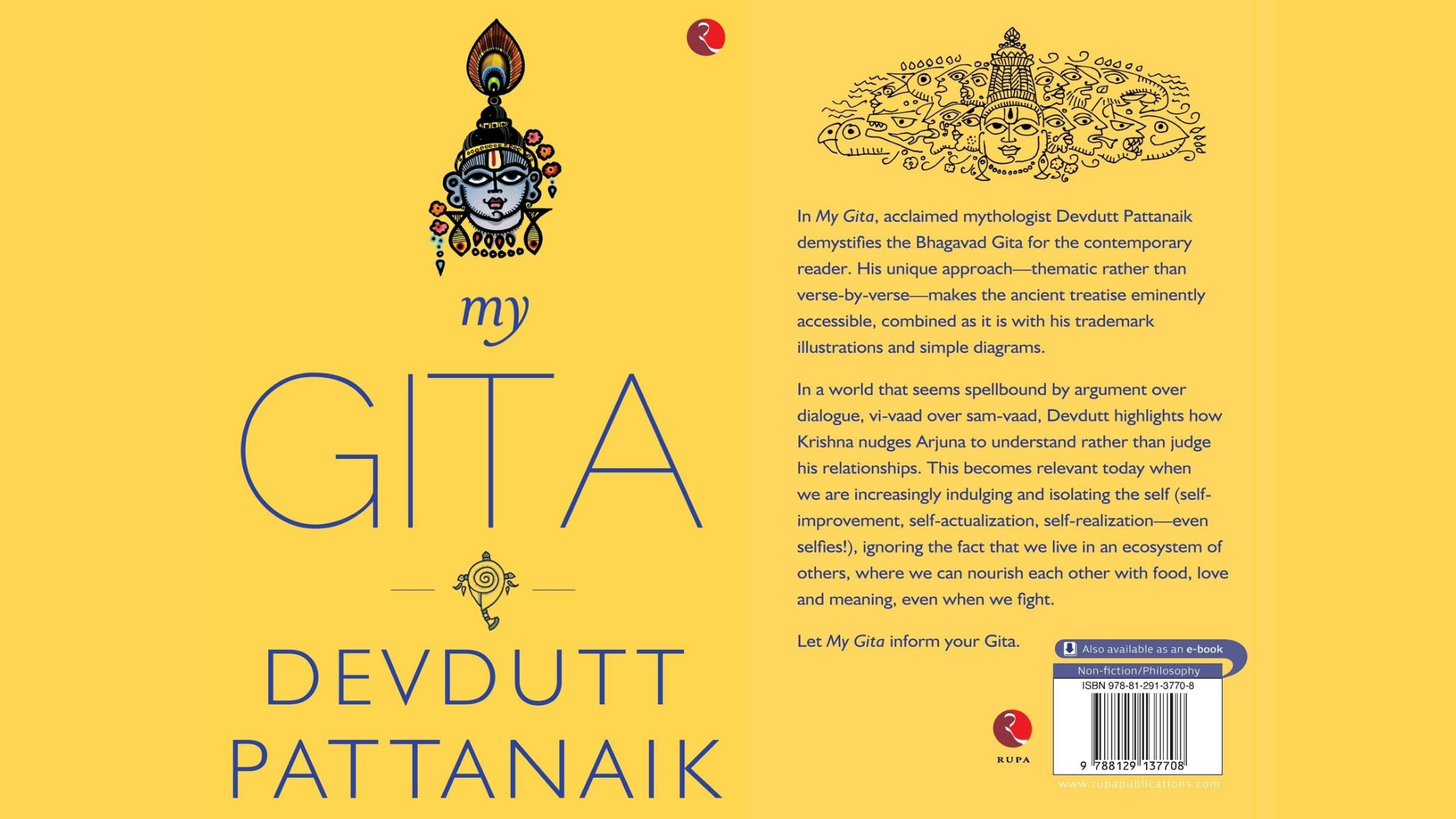 My Gita By Devdutt Pattanaik

Religious texts are intriguing, yet these probably are the most unread in contemporary times. However, there is one author who is reviving these texts in present-day form, drawing the attention of more readers towards its richness. ‘My Gita’ is Devdutt Pattanaik’s take on the Gita. Having said that, this book can certainly act as an instrument to inculcate curiosity in the readers wanting to read Indian scriptures but somehow who could never inherit the interest in doing so.

The author begins the book by explaining the reasons behind his attempt. He says that the Gita is thematic and goes on to further the chapter architecture in the Gita.

“First, Arjuna’s problem is presented (Chapter 1), and then Krishna’s solution (chapters 2 to 18) is offered. Krishna begins by telling Arjuna what he promised to tell (chapters 3 to 17); and finally, he repeats what he told (Chapter 18). Krishna’s solution involves analysis (sankhya) and synthesis (yoga) – slicing the whole into parts and then binding the parts into the whole. The solution itself is comprehensive, involving the behavioural (karma yoga), the emotional (bhakti yoga) and the intellectual (gyana yoga).”

Next, he goes on to talk about the subjectivity of the texts and their interpretations since its inception and the eventual focus of the book – self-realization and an account of why it serves the needs of the householder rather than the hermit. There is also a summarized form of elucidation on the history of Gita before the author goes on to write his perceptions on each of the eighteen chapters of the Gita.

There are comprehensions about the concept of darshan, immoral soul, capabilities of the body (deha), experiencing life differently, seeking meaning, facing consequences – the doctrine of karma, empathizing - dharma exchanging - yagna, discovering the source of disconnection - yoga, instilling trust, potential, inclusiveness – the concept of bhagwan and brahman, accommodation – avatar, control over the natural material tendencies, material value – claiming property (kshetra), comparison – maya, tendency to cling – moha, generosity – moksha, and the relation between self (jiva-atma) and the other (param-atma). Every chapter has paraphrased the verses from the original texts.

The book also at many junctures strikes a comparison of the philosophy of the Gita the text of the other faiths, giving the theories a further depth.

“The idea of rebirth forms the cornerstone of Hindu thought. It is also the mainstay of Buddhist and Jain philosophies. But there are differences. Buddhists do not believe in the existence of the immortal resident (atma), and Jains do not believe in the concept of God (param-atma), but they both agree on the concept of rebirth (punar-janam). In Jainism and Buddhism, the world of rebirths is called samsara, propelled by action (karma) and memories of past actions (samskara). These are sometimes referred to as dharma mythologies, distinguishing them from Abrahamic or non-dharma mythologies such as Judaism, Christianity and Islam that believe in only one life, and an afterlife in heaven or hell. Science endorses only one life, as the afterlife or rebirth defies scientific measurement.”

Although this book is completely how the author understands the scripture, it can act as a foundation if you are willing to study the Gita. It is also recommended to those who are just slightly intrigued by the philosophical texts; giving it a read might enhance your concern. It is evident that the author has put in a lot of research, and efforts in writing this book in its simplest form, making it easy for even an amateur to understand.