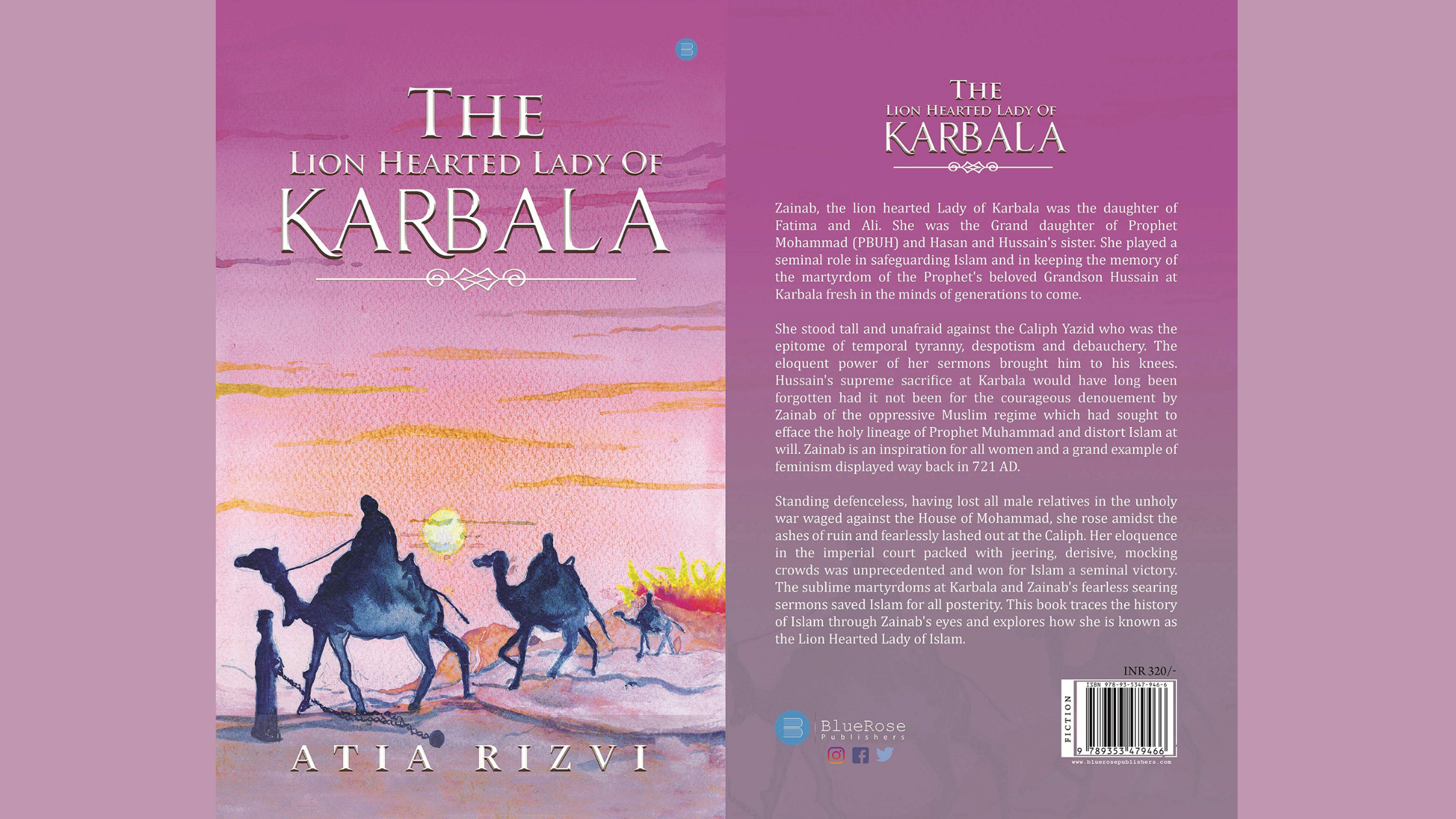 The Lion Hearted Lady Of Karbala By Atia Rizvi

The story of Imam Hussain’s martyrdom is one of the strongest foundations bearing the true ideologies of Islam. Had it not been for one lady, Hazrat Zainab, the tale of sacrifice would have been long forgotten. This is exactly what the book prescribes. The book is translated to English from its Urdu version of Karbala ki Sher Dil Khatoon by Atia Rizvi. Originally, the book was written by Ayesha Bintush Shati, a professor of Al-Azhar University, Cairo, in Arabic.

Written in a simple yet profound language, the book highlights almost all the episodes that led to the tragedy of Karbala. The leading characters of Hazrat Ali, Imam Hussain, Janabe Fatima Zehra, the Ahal Bait along with their lineages and the occurrences after the death of the Prophet leading to the massive change in the political scenario are sophisticatedly narrated. All the chapters are thoughtfully written, capturing the historical events well placed in the timeline. Reading forward, the book manages to hold the attention of the readers as the story takes an intense shape with every flipped page. The book also uncovers several unknown events, however, in the foreword, the author clears that ‘although the material has been derived from real events of history, it cannot be called a purely history book nor a work of fiction’.

The early chapters mostly focus on the lives and incidences which took place before Imam Hussain pledged to move to Karbala with his convoy. Although there have been few insights into the early life of Hazrat Zainab, her major role surfaces much later in the book, only after Imam Hussain, her brother, along with his entire procession, except women and children, attained martyrdom.

“Zainab was continuously in charge of laying down the dead bodies of persons who were martyred or those who were gasping for breath. Even as one martyr was placed on the ground, other dead bodies would soon be brought in and laid near the ones already there. All those who were martyred were placed in her charge. Their names are as follows: Her sons Aun, Mohammed, and Abdullah; her brothers Abbas, Jafar, Abdullah, Usman, Mohammed, and Abubakar; her Brother Imam Hussain’s sons Abubakar and Qasim; her uncle Aqeel’s son Jafar, Abdul Rehman, Abdullah and many more.”

The book takes a powerful take on the fierce speeches made by Hazrat Zainab in the court of Yazeed and before the people of Kufa. The subtle yet effective writing is sure to move the hearts of the readers and reflect upon the substance of true Islam.

“O Kufis, do you know whose blood you have shed? Whose son you have torn into pieces? Who venerated lineage you have made veil less? You have committed such a terrible crime that it appears, soon sky and earth will get cleaved and mountains will be torn into pieces”……..A person who had himself heard the oration of Hazrat Zainab said, “God is my witness, I have never heard such an elegant, polished address in my life. It appeared as if she was speaking in the accent and pronunciation of Ali.”

Hazrat Zainab didn’t fall back in taking the reins of propagating the truth about the tragedy of Karbala. Amidst ruins and ashes, she was audacious to fearlessly lash out at the Caliph about the horror inflicted on the revered Prophet’s family through her majlis that upturned the entire course of history destined otherwise. This is an attempt to trace the history of Islam through the Zainab’s eyes and portrays the real spirit of feminism. In the middle of all the adverse propagandas, the book is highly recommended to the history lovers who would want to have a closure look at the deeper textures of Islam.