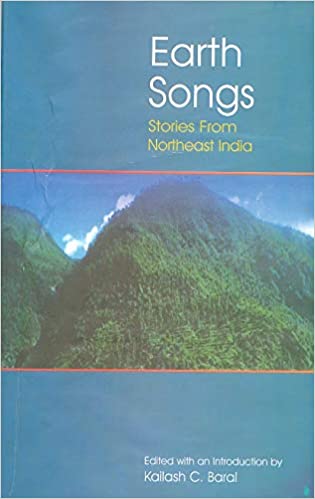 Northeast India has been one of the most unexplored regions of the country. The region is not only blessed with a captivating landscape but also embodies rich culture, food, and traditions giving birth to inconceivable folktales, myths, and stories. Earth Songs is an anthology of sixteen stories from renowned authors from Mizoram, Assam, Manipur, Meghalaya, Tripura, Nagaland, Shillong showcasing the varied ethos, people, and their beliefs.

The stories captured in the book are culturally connected yet quite different from one another. These are exquisitely weaved around distinct traditionally conditioned characters. “Innocence Wears Another Look” by Vanneihtluanga is a story of a young boy driven by the tradition of hunting defining masculinity kills a bird and sees life being squeezed out of the body for the first time, who eventually meets a similar fate. An Assamese story, “The Silver Roll of the Bridle-Path” is intricately written by Sibananda Kakoti. The story is a fascinating tale of Parama, a young boy who is interested to know of the thirsting souls, wonders about the world of the spirits, and is amazed at the world of the grownups, eventually unveiling a love story. “Another Moti” is a heart-wrenching story by Bhabendra Nath Saikia of a mother with meager resources to sustain herself, losing her only son to a mishap. “’ A Happy Journey’ for Mr. Ta En Wan Kharkrang” is a story about a happy man excited by the news of the government and banks advancing loans to the farmer, eventually trapped in the web of corruption by the government officials.

Then there are stories of the corruption faced by an honest schoolteacher, of politics, power, self-respect, stories of ethnic divides and sacrifices, suspicion and betrayal, inter-tribal clashes, of militancy, shattered dreams and hope, drug addiction and alcoholism, tales of love and loss, and even humor.

My favorite stories from the book have been “Basan’s Grandmother”, a modest story of affection, the conflict between neighbors and subsequent unforgettable sacrifice; “Hope” by Mitra Phukan which is a story of a young girl and an old mother searching for her husband and son who is suspected to have joined, perhaps a militancy group with high chances of being dead. The emotional trauma that these two characters undergo is heart-breaking yet narration renders some hope to the readers. Also, the last story of the book “Supping with the Spirits” by Easterine Iralu is an enthralling tale of a midwife who unknowingly happens to come across a village of loving spirits, who not just eats, shares stories, meet some long lost friends but even spends a night with them, only to discover the reality the next day. However, I could relate the most to “The Holy Dip” by Anima Dutta, the story of Mrs. Field, a woman in love with art, culture, transcending all religions.

“I looked at the sedate smile on her serene face and said, “Krishna” means beautiful and joyful.

Suddenly, I was taken by more surprise as Mrs. Field began reciting a couplet from the Naamghosa: ‘The word “Krish” is indicative of Earth; “Na” subsists in happiness.’

I was confounded as the lady from across the seven seas began to sing in broken words the lines from the Naamghosa. This instance of a foreigner’s love for Assamese language and literature took me back to the glorious days of the Arunodoi, to glorious women like Mrs. Bronson and Mrs. Brown. But this lady here was even more admirable – not only did she love our language, she loved our religion too.

‘You seem to know a lot about our religion.’

Most of the stories in the book have been translated into English from the original regional languages. This book is affluent with some great literary work and is a must-read for anyone who values literature, art, and culture. The stories documented in the book shall stay with the readers for a very long time.